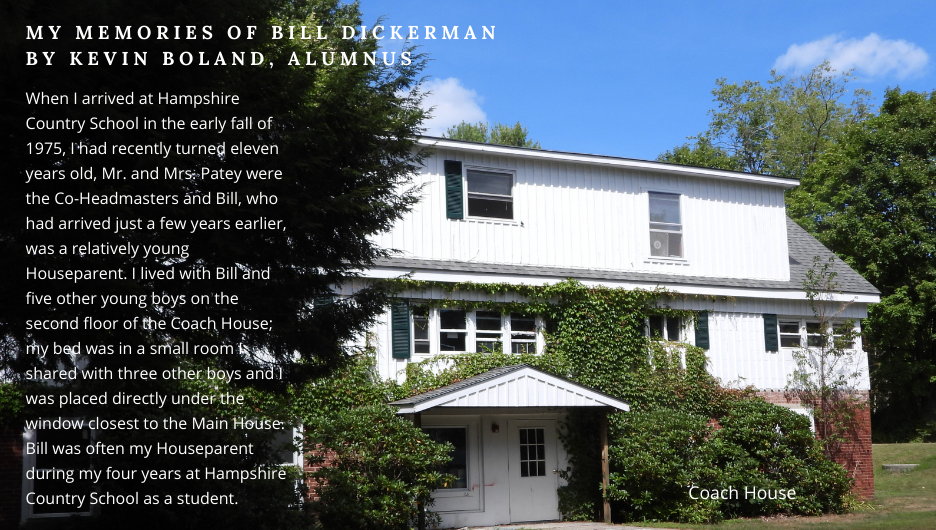 My family and Bill kept in touch over the years, almost every summer I would return to visit with Bill and camp in one of our old camping sites. When Bill took over as the Headmaster, he called one evening and invited me to be a Houseparent at the school. I returned as a Houseparent in 1996 and left when Bill helped me secure a position at Kurn Hattin Homes in Vermont as Houseparent and Teacher in 1998. Over the years, Bill was very fond of telling stories of our adventures together to parents and students.
During that first fall in 1975, despite having to manage six very energetic and sometimes contrary boys, Bill delighted in the evenings making an apple pie, or apple sauce to share with us during snack time. As Bill liked to tell the story years later to various parents, he once set me and my housemates upon a nearby well-endowed apple tree to gather the bounty of apples for that evening’s snack. We were remarkably successful and pulled every apple from that tree. Later that week, during the weekly staff meeting, Mr. Patey brought to the attention of the staff, that some rambunctious young students had pilfered an apple tree that had been laboriously, and with great love and anticipation, carefully cultivated over the years by Mr. Duckworth (the woodworking teacher). Bill told me years later he did not fess-up to the crime at the time but was extremely impressed with the exceptional flavor of those apples. 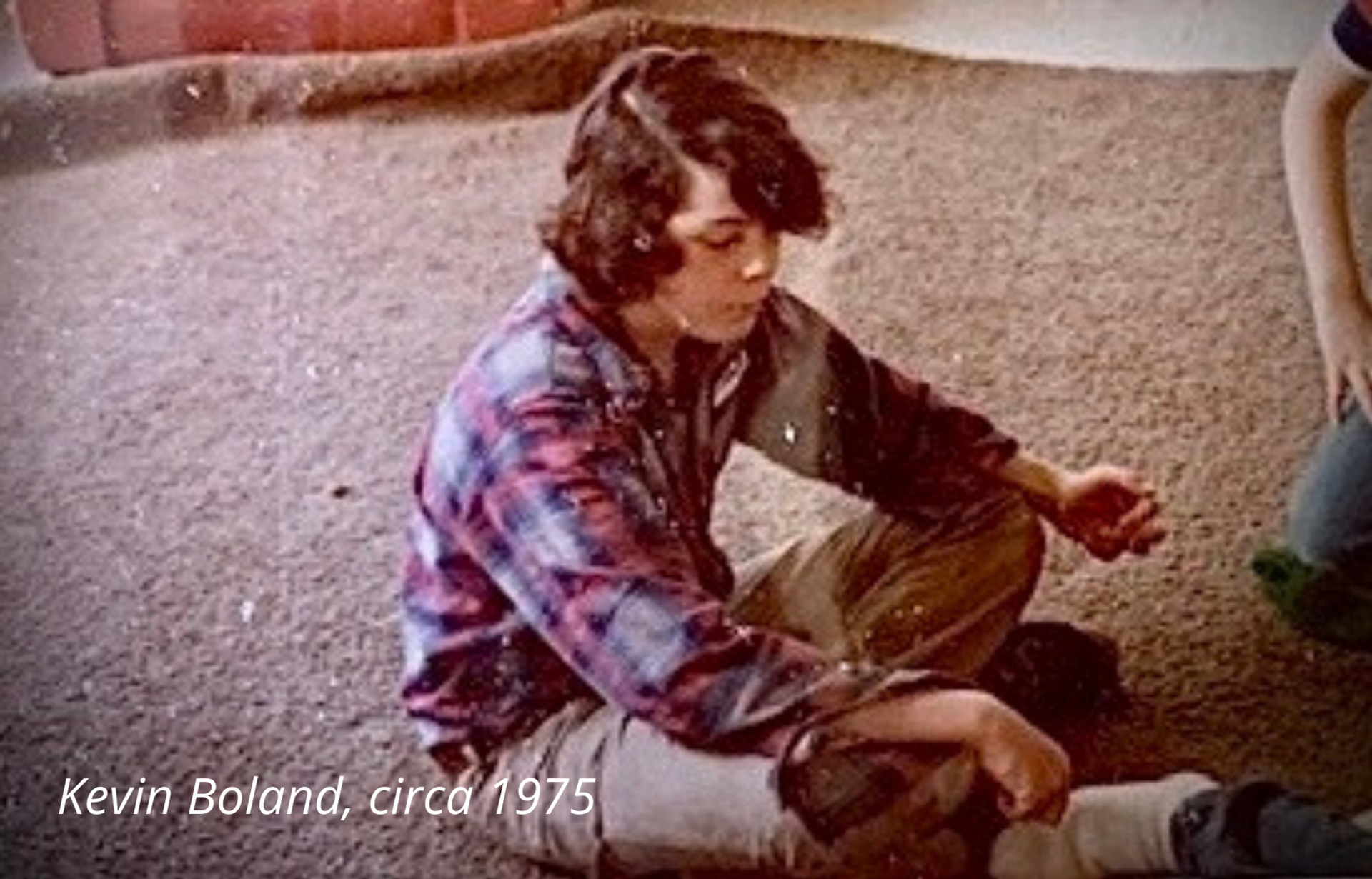 Also, Bill often told folks of a period in October of that year, when, being a rather insistent boy at times, had Bill spend an entire weekend reading me the witch story “Tituba of Salem Village”. He would tell folks it was a very cold, and rainy weekend, so he did not mind terribly satisfying my intense interest in hearing the story. I bought Bill a copy of the book and sent it to him years later in 2011 so he might share that experience again with another new young student.
Of the many great adventures Bill and I shared over the years, by far the one he most often shared with both students and parents was the infamous story of “One Too Many Policemen”. During my last year as a student, I was known for having a great collection of hats. One evening in the dark of winter, when returning to the off-campus house we lived in near Watatic mountain after dinner, we noticed headlights way off in an open field next to our house. Thinking on his feet as Bill was often known to do, he instructed me to run up to my room and retrieve my Policeman’s hat and a flashlight. I returned with the flashlight and hat, and being rather large for my age, Bill and I set off to engage and hopefully, intimidate the unwelcome invaders of our remote abode. As we walked across the open field, Bill very cleverly let the light from the flashlight wash over the policeman’s hat he was wearing. When we were within hearing range of the visitors, Bill summoned all his courage and sent forward a bellowing, “Hey, what are you doing here, who are you!”. At that challenge, the two figures stepped before the headlight, and we saw they were actual real policemen! Bill recounted as I was laughing at the embarrassment, he had to explain to the local police that were there investigating a stolen car left in the field, just what we were doing wandering around in an empty field in the dark.
My final story is about my last visit with Bill. Last July, while home from on leave from my station in Italy, I spent an afternoon with Bill in his home. Over the hours, we spoke of many things and eventually landed on the topic of an antique mantle clock I had often admired. While the clock itself was no longer working as a timepiece and had not worked for many years, Bill told me he liked to just hear the chime from the clock occasionally. Bill removed the cover in the back of the clock, and with a gleam of anticipation in his eyes, his finger gingerly plucked at the chime hammer. With the clear wonderfully gentle but rich return of the sound, I saw what I feel is the essence of my life-long friend and life mentor; he looks past imperfection and shortcomings and instead focuses on the uniqueness and wonder of all things and people.
I found this poem while a Houseparent at Kurn Hattin and always thought it spoke of the man I saw in Bill Dickerman - The Bridge Builder by Will Allen Dromgoole. 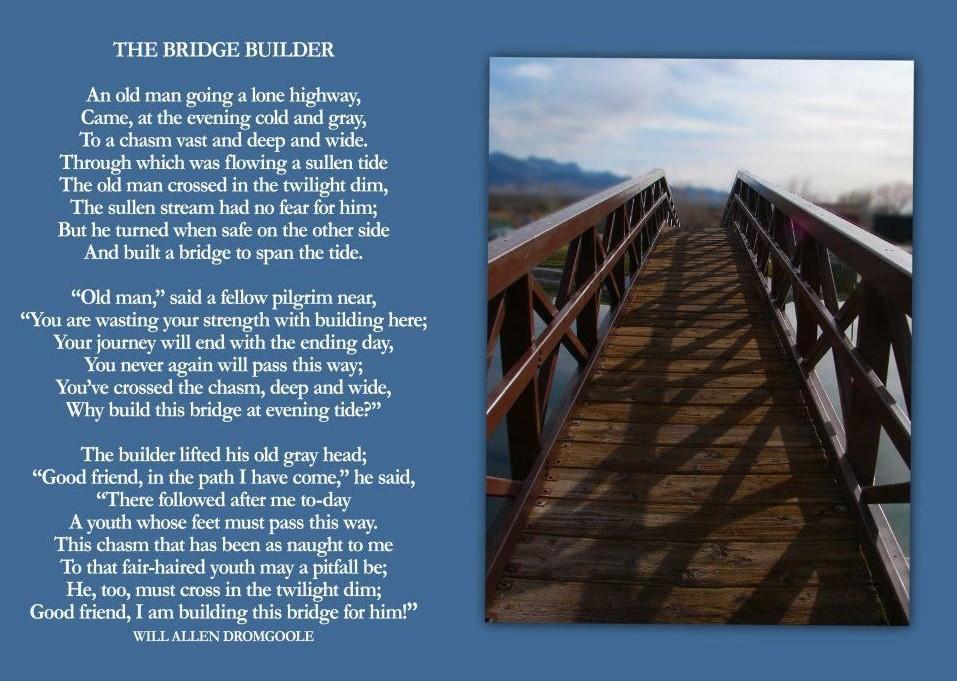